Apples, grapes and traditional cherries: Fruit from Chile has a special place at dinner tables all around the planet. So which Chilean fruits are the most exported worldwide? Here we present the 5 main types of fruit that put Chile in the global spotlight.

Recognized for their quality, variety and, in recent years, for sustainable production, fruits of Chilean origin have become a sought-after food in different corners of the world. One of the most dynamic sectors of the national economy is the Chilean agri-food sector. Here are the 5 leading fruits that put Chile in the global spotlight.

Whether for the traditional Chinese New Year celebration or simply for their sweet taste, Chilean cherries place first among the leading fruits exported by our country. Thanks to the fact that their season extends from October to January of each year, they have become a highly valued fruit in practically all markets, particularly during the Christmas and New Year’s holidays. 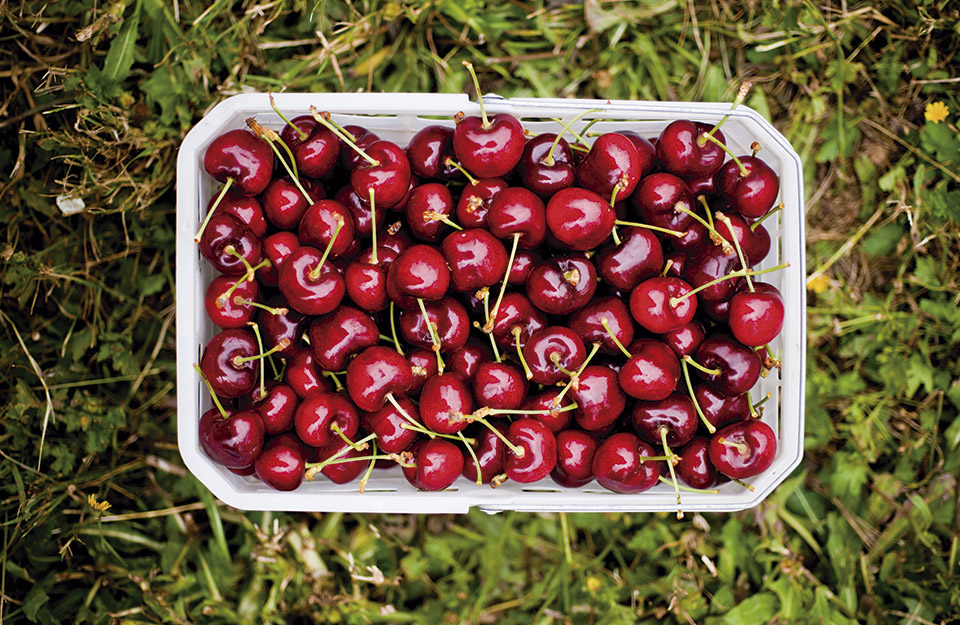 According to figures from Fruits from Chile, markets in Asia, especially China, are the principal destinations for this fruit. In fact, 90% of the 352,474 tons of cherries exported during 2021 were shipped to China.

Grapes have been part of people’s diet since prehistoric times. Traces have been found of the world’s oldest wine cellar, dating back to 4,000 B.C., as well as archaeological remains that show grape cultivation during the Bronze Age in the Middle East. Be that as it may, Chile is now one of the main grape producers in the southern hemisphere, because our climatic conditions make us ideal for growing them. In fact, almost 30% of the land used for growing fruit in Chile is dedicated to grapes.

Grapes are especially grown between the Atacama and Coquimbo regions, although there are vineyards throughout our country´s entire central coast. According to ASOEX, during the 2020 – 2021 season, the volume of grape exports was 536,448 tons, with North America receiving 50% of shipments, comprising the Red Globe, Crimson and Thompson Seedless varieties, followed by markets in Asia (25.7%) and in Europe (15.5%).

As jams, compotes or simply in their natural format, apples are one of the favorite foods in Chile, thanks to their versatility and ease of transport, as well as their characteristic flavor and durability. Today, more than 40 varieties are exported from Chile with markets in Europe (39%), Latin America (26.9%) and Asia (15.6%) being at the forefront. Apples are mainly grown in central-southern Chile, between the O’Higgins and Los Lagos Regions.

According to information published by ASOEX, during the last season Chile exported a total of 636,145 tons of apples to the world, and we are continuing to consolidate our position as one of the main exporters in the southern hemisphere.

At just 80 calories per cup, blueberries are rich in vitamin C and antioxidants, and are also one of the main fruits we export to the world. Although Chile only began to grow blueberries in the 1980s, today we have more than 15,600 hectares planted with them and have become one of the world’s principal producers.

According to the latest version of the Chilean Blueberry Committee Crop & Export Report, although the 2020-2021 season saw an 8% decrease in production compared to the previous period, almost 106,000 tons of fruit have been exported to the world this season, with the United States, the Netherlands, the UK and China leading the way.

In recent decades, Chile has become an important pear exporter in the southern hemisphere, accounting for 10% of global production. Produced mainly in the Metropolitan, O’Higgins and Maule Regions, the volume of pears exported reached 122,138 tons, which were shipped mainly to Europe (49.3%) and Latin America (36%), according to Pro Chile’s sector brand, Fruits from Chile.

International entities improve projections for the Chilean economy in 2021