The Patagonian Ice Fields as a barometer of climate change; Rewilding Chile as a global conservation model; Jurassic Park at the end of the world as a key to global paleontology; these are just a few of the themes that US and European media correspondents have been covering for almost a week in the Aysén Region, accompanied by world-class Chilean experts.

The latest trip organized by Imagen Chile to Region XI was a true expedition that sought to introduce the international press to different areas where Chile is creating future today. One highlight of the trip was a journey onto the Northern Ice Fields to learn about diverse phenomena experts are studying in response to the effects of climate change.

We accompanied staff from the Chilean Glaciology and Snow Unit as they performed a maintenance check on the structures and instruments of the glacio-meteorological stations that are monitoring climate change. While there, we conducted in-depth interviews about how Chile is seeking responses to one of humanity’s greatest challenges, global warming.  We explored glacial lake outburst flood (GLOF) events, landslides and ice-land slides; learned about the need to adapt to the disappearance of glaciers and replace these natural potable water sources; and discovered the importance of assessing glacial hazards and risks to the human population. 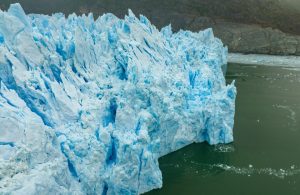 For a look at Chile’s contributions to conservation and stewarding the planet for future generations, we traveled to Parque Patagonia, where ecosystems are being restored and native species such as the huemul (south Andean deer), the ñandú (rhea), and the condor are being monitored for their protection and conservation. There, we met with the Rewilding Chile team to learn all about these kinds of initiatives in Patagonia, and were on hand to witness two condors, Pumalín and Liquiñe, being released back into the wild after completing their rehabilitation. We also visited the National Huemul Corridor, a pioneering initiative that is seeking to reconnect fragmented huemul habitat, and watched how this species is being monitored in the field.  We also visited South America’s only Ñandú Reproduction Center, which opened in 2015 to prevent the local extinction of this species at a time when there were no more than 20 of the birds remaining. 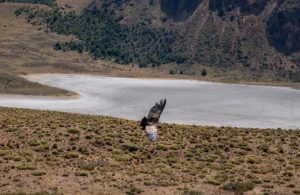 In the realm of Chilean scientific contributions, the group took a paleontology tour of an area of enormous scientific value in the zone.  The tour visited two sectors known to Aysen residents as the “Route of the Fossils” and “Jurassic Park at the end of the world,” where Chilesaurus diegosuarezi was discovered. The 148-million-year-old dinosaur was called “the paleontological discovery of the century” by British newspaper The Guardian when it appeared on the cover of Nature journal, as the species launched a controversial reorganization of the dinosaurs’ family tree.

Geologist Manuel Suarez, who found the dinosaur with his son, Diego, accompanied us on the tour and provided detailed answers to questions from the correspondents present. 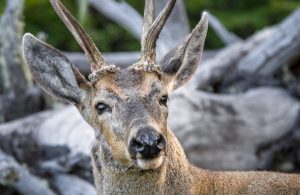 To see the bones of Chilesaurus and learn about many other interesting aspects of the Aysén territory, we went to the Regional Museum of Coyhaique, which had just been nominated as a Leading Culture Destination (LCD) in the 2021 Berlin Awards, known as the “Oscars of museums,” which will be held in March of this year.  The nomination is in the category of “NEW CULTURE DESTINATIONS OF THE YEAR 2021.” The LCD Berlin Awards “shine a light on the most exceptional emerging cultural destinations, celebrating the vibrancy of culture and connecting arts and tourism to inspire a dynamic exchange and establish a global network between culture and travel.” Another must-see in Chile’s Region XI, another natural Chilean laboratory that is creating future for the world.

Digital positioning, campaigns, data and stakeholder engagement: nation brands define the key themes for the 2022 forum while in Chile