Imagen de Chile Encounter 2022 “Creating Future, Together”: How to create a nation brand with purpose

Featuring renowned Chilean and international presenters, the latest version of the Imagen de Chile Encounter 2022 “Creating Future, Together” took place in hybrid format live from Santiago’s Casa Piedra and via streaming on EmolTV. Attendees from different fields and countries including the United Kingdom, the United States and Costa Rica came together to share experiences and key tools for building a nation brand. The winners of the “Imagen de Chile Awards 2022” were also announced.

Marking the return of international nation brand events, Imagen de Chile organized the Imagen de Chile Encounter 2022 “Creating Future, Together” in Santiago, Chile. The event, which took place in hybrid format, was aimed at the leading public- and private-sector stakeholders who contribute to building Chile’s country brand and positioning it abroad aligned with the core message of our new nation brand strategy, highlighting the talent of the Chilean people as agents of change and focusing on what Chile can offer the world.

“The world already knows Chile for its incredible landscapes and geography, but we wanted to go beyond that to show that Chile is creating future through the talent of its people. That’s why we’ve updated our positioning strategy with the phrase ‘Chile, Creating Future’. We wanted to respond to what we are today, and present ourselves to the world based on what we have to contribute. We have identified our purpose and focused our message on the most valuable qualities we have: our people, and their talent and creativity,” said Constanza Cea, Executive Director of Imagen de Chile.

The event covered a range of topics, from the role played by Imagen de Chile in the current context through its mission to make the Chile brand known globally. It also presented successful cases of other nation brands around the world, as well as the work of key organizations that are behind the promotion and strengthening of the Chile brand. There were also masterclasses given by world-class presenters like international marketing expert Andrew Davis; the deputy director of the GREAT Britain & Northern Ireland campaign, Kate Taylor Tett; the CEO of Explora, Gonzalo Undurraga; Chile’s International Economic Relations Undersecretary, Rodrigo Yáñez; and the executive chair of Sistema B Chile, Josefa Monge.

“There’s a phrase that I like, which is ‘sense of place’. It’s important to evaluate this concept that encapsulates a person’s feelings, their perceptions, attitudes and behaviors towards a place. Feeling a sense of place isn’t only logical. It includes the irrational; it has to make us feel something – the thing that is special about a place, not just what we know or understand about it – and that’s what we must create. Speak about a place has to give us goosebumps,” stated international marketing expert Andrew Davis during his presentation. 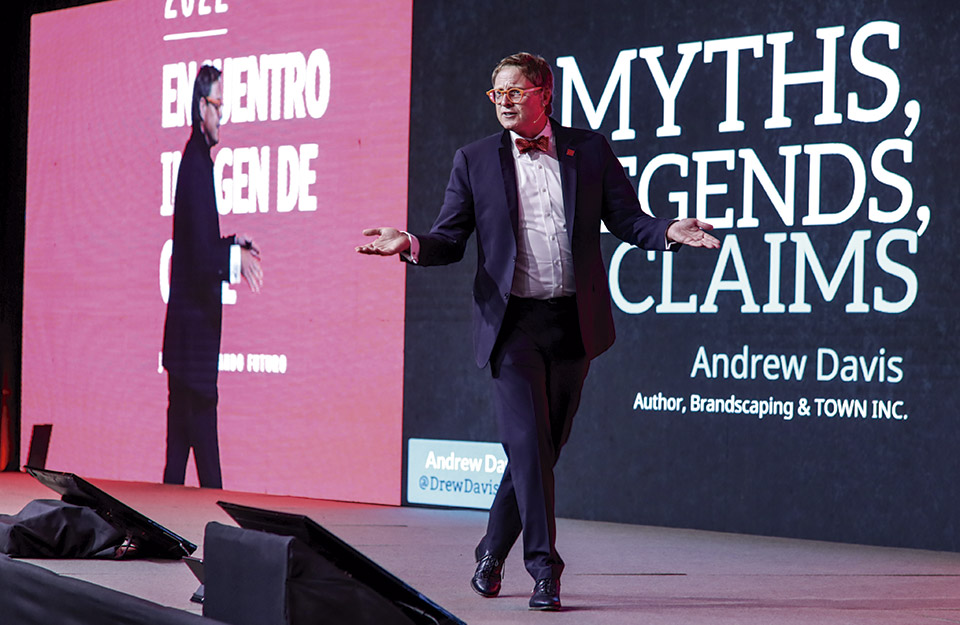 The deputy director of the GREAT Britain & Northern Ireland campaign, Kate Taylor Tett, talked about how they have built the brand in her country. “I think it’s accepted wisdom in the brand community that your brand doesn’t belong to you, nor to the boss or even to the marketing department. It belongs to the whole organization and everyone who interacts with it. Every time that someone interacts, a perception of the brand is being formed; the same can be said about a country brand.” 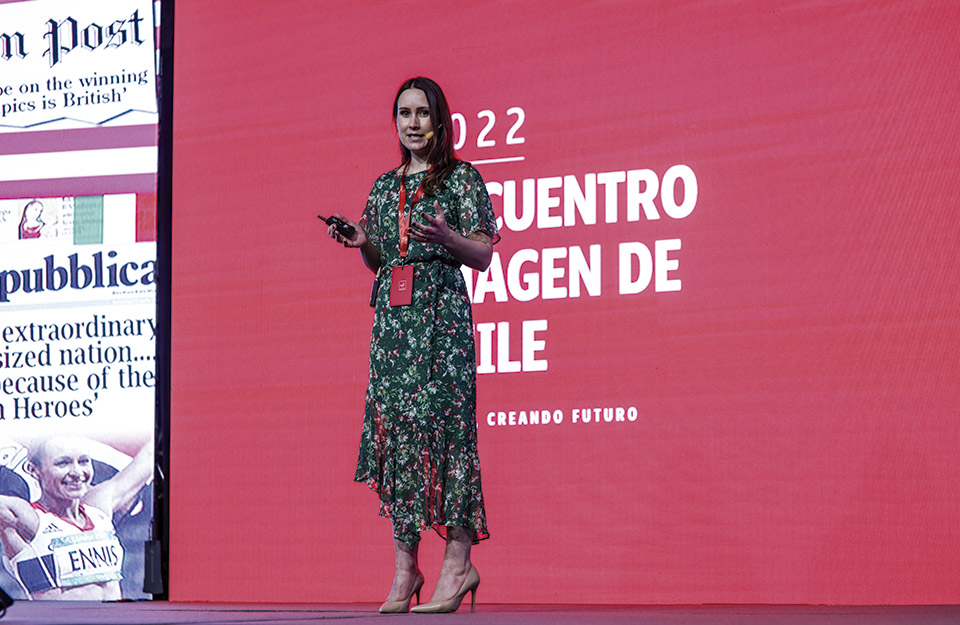 International Economic Relations Undersecretary Rodrigo Yáñez spoke of Chile’s success with the vaccination process, thanks to the trade agreements Chile has that connect it to the whole world. “With regard to Creating Future, we have adapted to be able to take advantage of what the potential of digital influence means for creating more inclusive trade that takes account of women, SMEs, indigenous peoples, with a very strong digital economy component,” Mr. Yáñez said.

Along similar lines, the executive chair of Sistema B, Josefa Monge, stated that the goal is clear: “We’re looking for business leaders to be people who face the world with curiosity, empathy and courage. We’re a country with an unusual concentration of B Corps – in fact, we’re the nation with the highest per-capita number of B Corps.” Meanwhile, Gonzalo Undurraga, CEO of Explora, referred to the importance of the positive impact of companies. “When you work with the territory, you can’t just focus on exploring it; we have to contribute to conserving it. To build a future together, we have an obligation to have a positive impact on the environment,” he stated.

Ten representatives from some of Ibero-America’s most important nation brand agencies were among the audience in attendance. They were in Chile to participate in the Ibero-American Country Brands Preforum, which is held around this time and which our country is hosting for the first time this year.

Country Image based on talent, innovation and entrepreneurship

One of the moments that really captured the audience’s attention was the panel discussion “Building a country image based on talent, innovation and entrepreneurship”. Participating in the discussion were Science, Technology, Knowledge and Innovation Minister Andrés Couve; future Environment Minister Maisa Rojas; director of Start-up Chile, María de los Ángeles Romo; and the director of the Essential Costa Rica country brand, Daniel Valverde. Alongside Constanza Cea, they discussed important success stories of Chilean people and businesses who are promoting Chilean talent around the world. 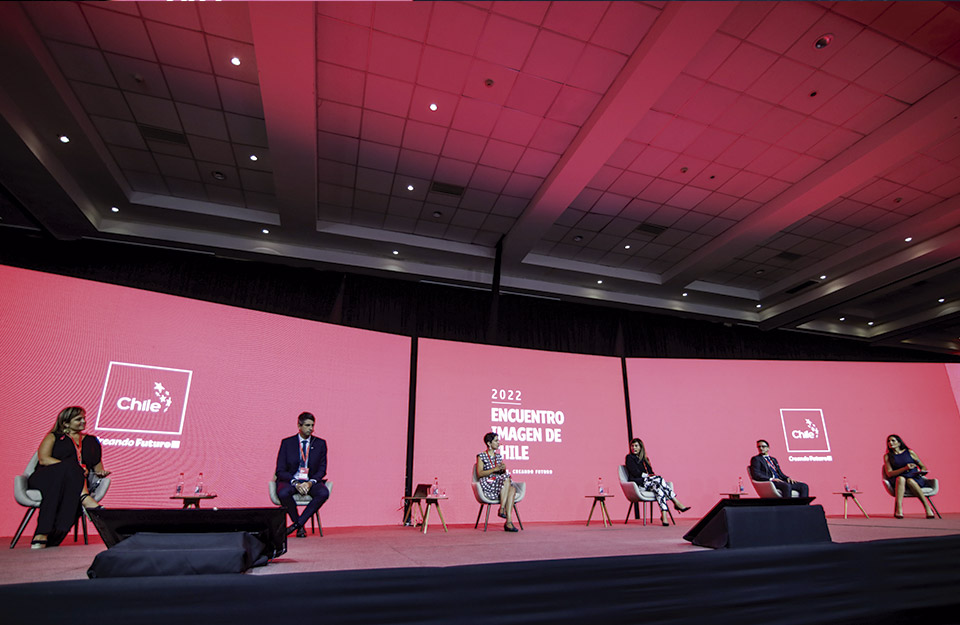 “One of the key messages from the 2018 panel report on how to limit global warming was that every decision counts. That doesn’t just mean the decisions that can be made at the highest level; it also means society as a whole. Today’s challenges are so complex and so long-term that they require a level of conviction and social consensus in which we all need to play our part,” stated Maisa Rojas, future Environment Minister.

Science, Technology, Knowledge and Innovation Minister Andrés Couve talked about the COP 25 and COP 26 leadership efforts that contributed to our country image, stating, “we contributed through our example. The example of a small country, which represents a lower emissions percentage, but which is doing things relatively well, with an ambitious and feasible project, integrating the scientific community and evidence-based decisions. It was the same with the pandemic, where the scientific community responded in an extraordinary way and added value to how Chile faced the most difficult moments, with the vaccination process or data availability, for example. That made us stand out internationally.”

“These events are important for sharing the different experiences of each country brand, so that together we can delve into the things that have gone well and those that haven’t. Ultimately, it’s about generating individual and collective learning,” emphasized Daniel Valverde, director of the Essential Costa Rica country brand.

The director of Start-up Chile, María de los Ángeles Romo, spoke of the entrepreneurial ecosystem that has allowed many start-ups to get established in Chile during their early stages. “According to our studies, 70% of the entrepreneurs that decide to come to Chile stay here, not only because Start-up Chile is a good incubation program, but also because there’s a good system that welcomes them,” she explained.

To close the event, the winners of the “Imagen de Chile Awards 2022” were announced. The awards aim to identify the organization, person and brand that best embodies the central message of the new country brand strategy “Chile, Creating Future”. The strategy seeks to showcase our country through the contributions that Chile makes towards creating a better future for the world.

The “Imagen de Chile Company Award” was given to Wheel the World, one of the most internationally-acclaimed Chilean start-ups whose purpose is to help those with disabilities, their friends and families to find accessible accommodation and experiences around the world. Today, it has not only become a travel solution for people with disabilities, but it has also empowered and inspired disabled travelers to explore the world without limits.

The “Imagen de Chile Spirit Award” went to the Pontificia Universidad Católica de Chile professor and researcher, Alexis Kalergis, for his work as director of the Millennium Institute on Immunology and Immunotherapy, and for his advisory role on governmental and legislative committees. The academic is currently a member of the International Center for Genetic Engineering and Biotechnology (ICGEB) Council of Scientific Advisers, and has been key to the development of the Sinovac vaccine clinical trial, which resulted in the priority supply of doses for the mass COVID-19 vaccination campaign in Chile.

Finally, the “Chile Brand Award” was given to Tribú, a healthy snack business that places value on local, organic products. The award seeks to recognize one of the more than 1,000 companies that is part of our Brand Use program.

The selection criteria for the awards were each company’s connection to their source of origin and commitment to promoting Chile’s country image, their track record in the market, and their link to the creating future concept.

Digital positioning, campaigns, data and stakeholder engagement: nation brands define the key themes for the 2022 forum while in Chile