Five hundred women from La Araucanía Region participated in the attempt, breaking the world record set by Chinese weavers in 2017.

On Saturday, May 21, Puerto Saavedra seafront in La Araucanía Region was the scene of a new record for Chile: 426 Mapuche women organized by Fundación Chilka came together to create a weaving that stretched over one kilometer along the coast, breaking the record for the longest weaving in the world.

The feat, which involved over a year of planning and national outreach, far exceeded the previous record held by China for a weaving that measured 276.41 m2. “We want this piece to travel the world. We want it to travel, to be set up in different territories and speak for our weavers,” explained Ariel Traipi, President of Fundación Chilka.

“We want to raise awareness of weaving and of the weaver in her milieu. We want to highlight cultural landscapes, practices and rites. This is a journey, an immersion in Mapuche culture. We are excited to have won and be crowned the first indigenous group in the southern hemisphere to set a world record,” he added. 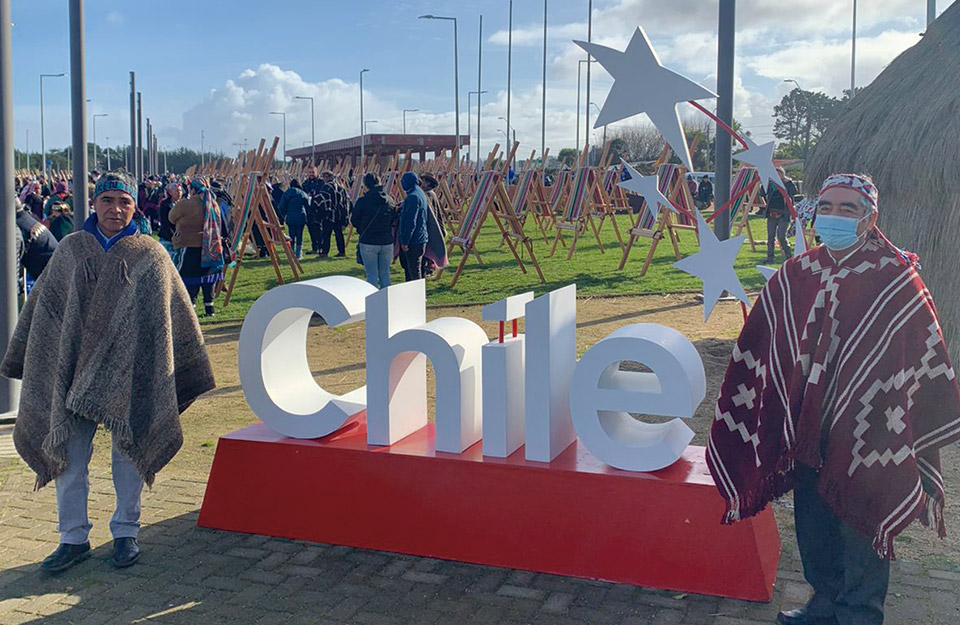 Valuing the place of origin

Fundación Chilka is one of the institutions that recently became part of Fundación Imagen de Chile’s Brand Use Program, an initiative that provides various benefits to local producers, from institutional support to positioning, and valuing the place of origin.

“Imagen de Chile is very proud of this record. It shows how Chile is creating future from our roots. Our indigenous peoples are positioning themselves around the world through culture, using this ancestral tradition that has been passed down from generation to generation. In addition, Fundación Chilka is part of Brand Chile, which is key for valuing the origins of our country,” explained Imagen de Chile Executive Director Constanza Cea.

Over 420 Mapuche weavers participated in the attempt, traveling from as far as the Coquimbo and Los Lagos Regions. While 90% of the participants were familiar with traditional Mapuche wixtal weaving, the organizers created the Ngüren School of Mapuche Art and Handicrafts to train weavers in the model and design used, which was created by Fundación Chilka President Ariel Traipi.

One ton of Dohne Merino wool from Tierra del Fuego was washed and dyed by the Puren community artisan cooperative for the project. The weaving’s colors were inspired by the foundational colors of the Mapuche culture and represent values ranging from Che Troki Wün (respect for the person) to Manelüwün (channeling confidence).

Imagen de Chile presents the next stage in the “Chile Creating Future” campaign from Talca, with the story of two young people from Maule

From Ovalle to the world: Un Alto en el Desierto (A Stop in the Desert) stars in Imagen de Chile´s new international campaign