Chile’s Observatories: the world’s eyes to the Universe

Chile is known as the astronomy capital of the world, as more than half of the planet’s astronomical capacity is concentrated here. Due to the incredible telescopes that are located in the north of Chile, it is often said that our country is the world’s eyes to the Universe, which renowned researchers are using to observe and answer the questions of the future. Here, we tell you about 10 telescopes in Chile that will amaze you: 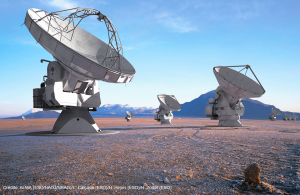 The ALMA observatory opened its doors to the world’s astronomers in October, 2011. That same month, the first image captured with the complex’s telescopes was revealed, even though the observatory was still under construction. The fact is that ALMA is not just any old telescope, but the largest astronomical project in the world.

With 66 antennae designed to observe millimeter and submillimeter wavelengths, ALMA has greater observational precision than any of the world’s other observatories. The images from each antenna are combined with those of other devices, which provides greater resolution and unique possibilities for observing astronomical phenomena hundreds of light years away. Its name is really an acronym for the Atacama Large Millimeter/Submillimeter Array. Located in the middle of the Atacama Desert on the Chajnantor Plain, more than 5,000 meters above sea level, the observatory is part of a project carried out through the collaboration of Europe, North America, East Asia and Chile.

The European Southern Observatory’s (ESO) Extremely Large Telescope, or ELT, will be the world’s largest visible-light and infrared telescope – the world’s largest eye for looking at the sky. It is being built in the Antofagasta Region, at the top of Cerro Armazones. It should come into operation in late 2027, and will allow us to observe what has not yet been explored by humanity in space research. Heavy civil construction of the ELT has already progressed by 40%. It is a huge telescope in the optical-infrared spectrum, whose main 40-meter mirror will be made up of 798 segments in a hexagonal honeycomb-like shape. It will allow direct observation of planets like our own orbiting distant stars, as well as other wonders yet to be imagined. In addition to its unprecedented size, the ELT will be equipped with a line of state-of-the-art instruments designed to cover a wide range of scientific possibilities. The great leap forward that the ELT will provide may lead to a paradigm shift in our perception of the universe, like Galileo’s telescope did 400 years ago. 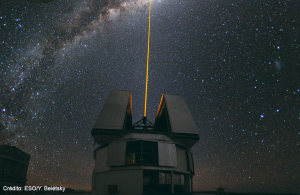 The Paranal Observatory is an optical astronomical observatory operated by the European Southern Observatory (ESO), located in the municipality of Taltal, on Cerro Paranal in the Atacama Desert. It is made up of four telescopes that connect using interferometry. It has been fundamental to investigating the super massive black hole at the center of our galaxy, for which Reinhard Genzel won the Nobel Prize in Physics. Today, it houses the most precise ground-based instrument for exploring and studying extrasolar planets. 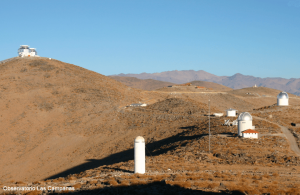 LAS CAMPANAS
The Las Campanas Observatory is part of the Carnegie Observatories, whose astronomers wanted for a long time to install an observation station in the southern hemisphere that would give them access to the Magellanic Clouds and the center of the Milky Way. That was how this observatory located high in the mountains of the Atacama Desert was established in 1969. It became home to the 1-meter and 2.5-meter reflecting telescopes that came into operation in 1971 and 1977, respectively. The most recent additions have been the twin Magellan telescopes, 6.5-meter reflecting telescopes that are prominent members of what was the last generation of giant telescopes. The Magellan twins have been part of the experiment that has had the greatest impact on modern astronomy since its fifth stage, the Sloan Digital Sky Survey. This survey has laid the foundations for big data in astronomy, and has been the forerunner for instruments such as the Vera Rubin Observatory, soon to be inaugurated in the Coquimbo Region. 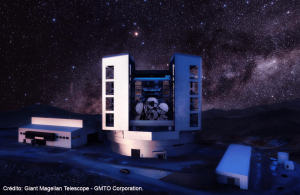 GIANT MAGELLAN TELESCOPE
The Giant Magellan Telescope or GMT is the most advanced ground-based telescope that modern engineering has created. It has 19 million times the light-gathering power of the human eye, and will produce images sharp enough to distinguish the details of a coin located nearly 160 kilometers away.

It is currently under construction in the mountains of Chile’s Atacama Desert, one of the best places on the planet to explore space. It is the work of an international consortium of world-leading universities and research institutions. It was designed to expand the limits of human knowledge and discover the unknown. With unrivalled image quality and seven of the world’s largest mirrors, it will allow us to explore the universe like never before, find planets similar to Earth, study their atmospheres and look for signs of life. We will be able to use it to investigate the cosmic origins of chemical elements, uncover the mysteries of dark matter and dark energy, and go back in cosmic time to explore the formation of the first stars, galaxies and black holes. 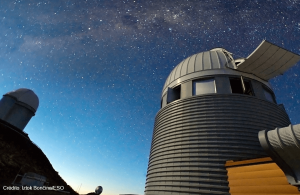 The La Silla Observatory remains at the forefront of astronomy with nearly 300 annual citations attributable to its work. La Silla has provided an enormous number of scientific discoveries, and is the site of several firsts such as the HARPS spectrograph, the leading searcher of low-mass extrasolar planets. It detected the system around Gliese 581, containing what could be the first known rocky planet in a habitable zone outside the Solar System. Many telescopes at La Silla played a crucial role in linking gamma-ray bursts – the most energetic explosions in the Universe since the Big Bang – with the explosions of massive stars. It is located in the southern part of the Atacama Desert at an altitude of 2,400 meters, and is made up of a network of 18 telescopes and instruments such as an extrasolar planet finder. It also housed the first ESO telescope in Chile. 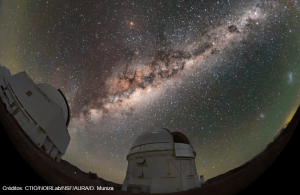 CERRO TOLOLO
The Cerro Tololo Inter-American Observatory is one of the longest-operating telescope complexes in Chile, and for decades has been recognized as one of the most important in the southern hemisphere. Located 2,200 meters above sea level on the hill that bears its name, this observatory that crowns the Elqui Valley was the first to be integrated into the Association of Universities for Research in Astronomy (AURA), thus becoming the first international astronomical scientific project developed in the country. It contains the Dark Energy Camera (DECam), a high-performance wide-field CCD camera built to carry out the Dark Energy Survey (DES), a scientific project led by the US Department of Energy. The instruments and facilities of this observatory are operated and shared by astronomers from both hemispheres. Every year, more than 100 visiting scientists and students from more than 50 institutions travel to Cerro Tololo to carry out research. 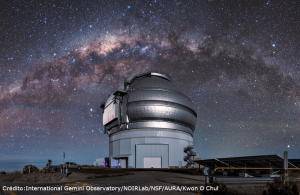 GEMINI SUR
The Gemini Observatory is actually two twin 8.1-meter optical and infrared telescopes located in two of the best places on the planet for astronomical observation. Alongside its sister telescope located on Mauna Kea Island, Hawai’i, Gemini Sur is located at 2,700 meters above sea level, taking advantage of the privileged conditions that the Coquimbo Region possesses for observing the southern hemisphere skies. From its complete automation to its optimization for observing through infrared images and adaptive optics, this observatory has characteristics that make it unique among its kind. It was the first global astronomical mega-project, opening the doors to a new stage of global astronomy in the nineties. By incorporating technologies such as laser guide star adaptive optics and multi-object spectroscopy, astronomers in the Gemini association explore the Universe in unprecedented depth and detail. 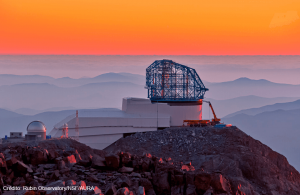 VERA C. RUBIN
The Vera C. Rubin Observatory is located 100 kilometers from La Serena on Cerro Pachón. It is a modern observatory that will capture complete images of the sky every three nights, and thus carry out a pioneering synoptic survey that will contribute to the exploration of the Universe. It will have the world’s largest camera, a 3,200-megapixel digital device that will allow the collection of unprecedented volumes of information in astronomical research, capturing the entire visible sky. Every night, about 10 million objects will be observed, and reflected in the more than 20 terabytes of content that will be generated. The pictures that it will take will also be in 3D, allowing a unique view of the Universe. The initial plan is for the observatory to carry out an optical survey for 10 years from its inauguration, which will have four main areas: the nature of dark matter and understanding dark energy; cataloging the Solar System; exploring the changing sky; and Milky Way structure and formation. It is unique in having committed to making public all the information it obtains. 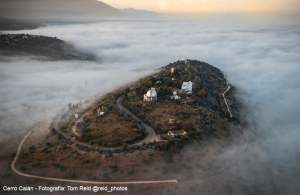 CERRO CALÁN
With more than 150 years of operation, the National Astronomical Observatory or Cerro Calán Observatory is one of our country’s oldest astronomical observation centers. Managed by the Department of Astronomy at the Universidad de Chile, it is located only 867 meters above sea level. The observatory is used for teaching as well as research. Weekly cycles of night-time visits are also made for the general public, with the aim of disseminating astronomy and science among the Chilean population.

A unique ecosystem for developing science and knowledge

The steward of Antarctica's native plants