“I am the Earth. Stories from the Southern Edge of the World” documentary was presented in Montreal during the COP15 on Biodiversity

The film produced by Imagen de Chile was screened at Concordia University to show how this country is tackling climate change and developing innovations to mitigate global warming.

The COP15 on Biodiver­­sity, held in Montreal on December 7-19, provided the backdrop for a screening of the documentary “I am the Earth. Stories from the Southern Edge of the World,” in an event co-organized by the Consulate General of Chile in Montreal, Concordia University and Fundación Imagen de Chile.

The screening of the documentary was followed by a panel discussion composed by Maximiliano Bello -Global Fellow, Latin American Program, Wilson Center and consultant on International Ocean Policy-, Rebecca Tittler -Faculty, Loyola College for Diversity and Sustainability, Concordia University-, and Cristián Sjögren -Co-Founder & CEO of AgroUrbana, one of the stories highlighted in the film-.  The panel was moderated by Éliane Ubalijoro -PhD, Executive Director of Sustainability in the Digital Age and Global Hub Director for Future Earth Canada.

“It is really important to us to be present at major international events focused on environmental protection, biodiversity and climate action, because this documentary shows how Chile is developing real, concrete and relevant solutions to mitigate global warming, and how our country is becoming a key player in climate action—not only at the public policy level, but also among our citizens, who are developing proposals and solutions in different fields. We want the world to know what Chileans have contributed, and we want to inspire people to take action on this urgent issue that concerns us all,” said Imagen de Chile’s Marketing Director, Ximena Baeza. 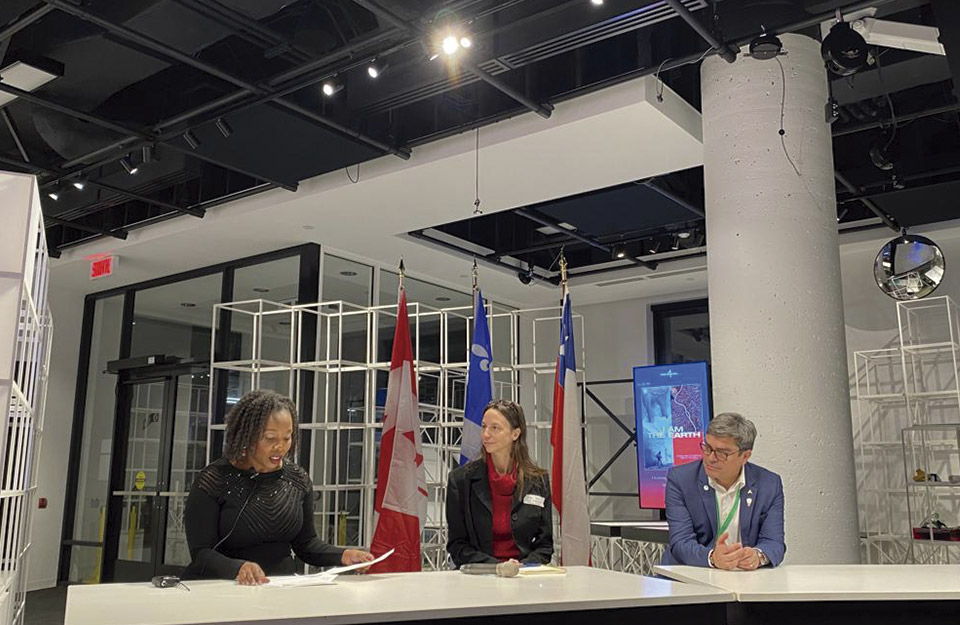 The General Consul of Chile in Montreal, Felipe Orellana, emphasized the importance of this global summit: “This week Montreal has become the global biodiversity capital, with close to 20,000 delegates from around the world attending the COP15, the most important conference in the past decade. As a complement to this global event, the Chilean Consulate has partnered with Concordia University and Imagen de Chile to screen the documentary “I am the Earth. Stories from the Southern Edge of the World,” which portrays a series of Chilean civil society initiatives to protect the environment,” commented Orellana.

William Cheaib, Associate VP, International and Chief of Staff, Office of the President, Concordia University, valued the documentary and the urgent need to protect our planet. “In an inspirational journey, I am the Earth reminds us that the beauty of our planet is inseparable from its fragility. No matter where we live, Canada, Chile, or other countries, Earth is our essential home. We all hold the same passport, and we are all responsible for the future of our planet. As a new-generation university, Concordia has a longstanding and steadfast commitment to sustainability. We believe that it is through collaboration and collective action that we can have a real and positive impact on our planet. We look forward to continuing our close collaboration with Chile,” said Cheaib.

I am the Earth. Stories from the end of the world

The documentary “I am the Earth. Stories from the Southern Edge of the World” showcases Chilean initiatives for mitigating climate change in five focal areas: sustainable agriculture, biodiversity conservation, renewable energy, solutions to the water crisis and astronomy.

Award-winning Chilean documentary filmmaker, the renowned Maite Alberdi, was part of the directorial team of the featurette, alongside directors María Paz González, Sebastián Fernández and Santiago Correa. The film was produced by Fábula.

*I am the Earth panel discussion