Chile’s geographic contrasts allow the country to have a diverse food culture that varies from north to south. On the other hand, the coast that runs along the entire country has forged a strong fishing tradition that can be appreciated in all the dishes that have seafood as their main ingredient. It is precisely this diversity what is celebrated on the Chilean Cuisine Day, celebrated every dear on the 15th of April since 2006. Here we show you 5 of the most representative dishes of Chilean cuisine. 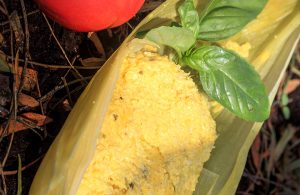 Humitas: The humita is a popular dish during Chilean summers, when corn -its main ingredient- is ripe and abundant in Chilean markets. It is a mashed corn-based preparation of a paste-like texture that also includes sauteed onion and some basil. The paste is then wrapped in the corn husks from the same corn used to prepare it, which makes the experience of eating humitas an important part of the charm of having this dish: untie the little string that holds the husks together and enjoy! The sides for this dish vary, but tomato and sugar are the most common.

It is worth noting that there are similar preparations all across Latin America, like it is the case in Argentina, Bolivia and Mexico.

(PilotGirl / Flickr )
Curanto: One of the most representative preparations of the Chiloé archipelago, its ingredients range from fresh seafood from the area, potatoes, sausages, to legumes. In addition to these, curanto also includes other preparations that are typical of the area, as it is the case of the potato-based bread-like milcaos and chapaleles. Curanto is a dish that stands out not only because of its flavor, but also because of the process behind its preparation, which is carried out outdoors in a hole dug in the ground where a fire is lit. Stones are then laid in the hole; these absorb the heat of the fire and are the ones responsible to cook the ingredients. Finally, everything is covered with nalca leaves, a native plant of southern Chile and Argentina.

The preparation of curanto can take up an entire day, which makes it a social event itself, gathering different members of the community around the fire, sharing stories while the curanto cooks. Moreover, there is a version of curanto that follows more traditional cooking methods, known as pulmay or curanto on a pot.

Porotos con rienda: The traditions of Chile’s countryside find their greatest expression in this preparation, which uses beans, noodles, sausages, pumpkin and other vegetables as its main ingredients. Its name makes reference to its original preparation, in which stripes of pork skin replaced the noodles in the soup. When the dish was adopted in more urban areas, where it was difficult to get the stripes of pork skin, the noodles took their spot.
Porotos con rienda are a popular dish during winters in Chile, due to the comforting broth that accompanies the legumes.

(James/ Flickr)
Caldillo de Congrio (Conger Chowder): A classic dish that gathers the best of the Chilean coasts, conger chowder has conger as its big protagonist. The fish is accompanied by potatoes, carrots and other vegetables in a comforting boiling broth. It is usually served on a clay pot that keeps the ingredients warm once they have left the kitchen.

This preparation has become part of Chile’s popular imagination thanks to the national poet and Nobel prize winner Pablo Neruda, who enjoyed conger chowder so much that he wrote and entire ode to it in one of its books. The opening stanza goes:
In the storm-tossed Chilean sea lives the rosy conger, giant eel of snowy flesh. And in Chilean stewpots, along the coast, was born  he chowder, thick and succulent, a boon to man.

Charquicán: It is a simple preparation whose history goes back to pre-columbian times. Its original recipe used potatoes, pumpkin and charqui (jerky). The latter is one of the main reasons behind this dish’s name, which is said to derive from the quechua (indigenous language) “charquikanka”, which translates as jerky stew. Over time, jerky was replaced with fresh meat; moreover, on their arrival to the continent, the Spanish brought along different spices that would become part of the ingredients of charquicán.
It is worth noting that there are different versions for this dish all across Chile and Latin America. There are areas in the north of the country that add rice to the recipe, while in the south it is common to serve the charquicán with a fried egg on top.

Which are Chile’s most amazing sandwiches?

Algae in Chile, more than just a superfood

Potato and how to use it in 5 Chilean traditional dishes

Six Chilean seafood products that are beneficial for your health