15 surprising birds to watch for when traveling in Chile

From tiny, 7 cm-long hummingbirds that are only rarely sighted in just a couple of valleys of far northern Chile, through impressive condors that can be found throughout the Chilean Andes, to the enormous ñandus of Chilean Patagonia and South America’s largest woodpecker, our country boasts a wide variety of distinctively Chilean birds. Not all of them can fly, but some of them can run up to 60 km per hour and others are so tough they can live in fast-flowing rivers. Here are some of the most important, captivating and representative birds in Chile, from north to south, compiled with the collaboration and resources of the Red de Observadores de Aves y Vida Silvestre de Chile (Network of Bird and Wildlife Observers of Chile).

This species is endemic to Chile and lives, eats and breeds primarily in the Camarones and Chaca valleys and their environs in the Arica and Parinacota Region. It is Chile’s smallest bird, reaching 7-9 centimeters in length and weighing just 2-3 grams, and it is one of the country’s most threatened species due to the degradation of its habitat. According to the international conservation classification, it is critically endangered, meaning there is a population under 300 individuals. It has a metallic green head and upper body and a white breast.

To protect this bird, a section of the Chaca ravine (in the Arica and Parinacota Region) has been safeguarded by being declared the Arica Hummingbird Natural Monument.

This aquatic bird is found in Chile from Arica and Parinacota region to Tierra del Fuego. It lives in shallow waters (both fresh and salt water), from the coast up to 4600 meters above sea level, so it can commonly be found in zones such as Laguna Chaxa in the Atacama Salt Flat (Antofagasta Region), in El Yali National Reserve (Valparaíso Region), in Chiloé (Los Lagos region) and in Patagonia. It grows up to 1.3 meters high and weighs up to 7 kilograms. It has light pink plumage, with darker areas near the tail. It is the southernmost flamingo species on the globe.

The chorlito cordillerano is distributed between the central Peruvian Andes and the Central Chilean Andes, and thus can be found in Chile from Arica to Curicó (Maule Region). It obtains its food (aquatic arthropods) from wetlands, highland meadows and riverbanks in the high Andes. It measures 20 centimeters in length, has a black head encircled with a white crown, a white breast with fine black lines, a greyish back and yellow feet.

The largest woodpecker in all of South America, and one of the largest in the world. The species is endemic to the temperate and sub-Antarctic forests of Argentina and Chile, and in our country, it is found in Patagonian oak and Araucaria forests from O’Higgins Region to Magallanes. It can reach up to 48 cm in length. The female is pure black, and the male has a black body with a crimson head. The wings are white underneath, giving it a distinctive look during flight. It feeds primarily on invertebrates it finds underneath the bark of old trees, and nests in tree cavities eight meters above ground. Like many species of woodpeckers, it uses its beak to peck trees in a powerful, rhythmic manner. 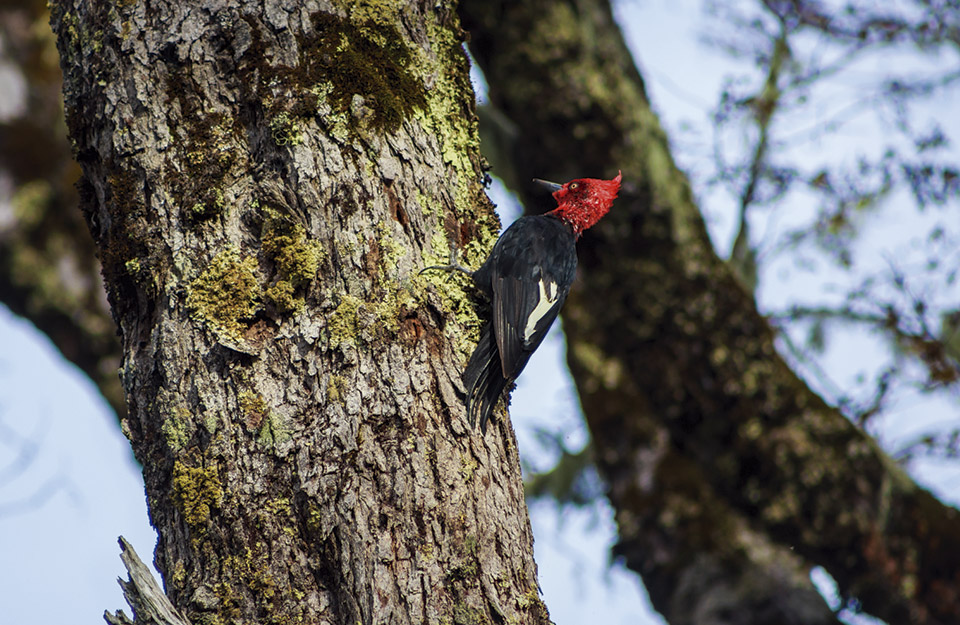 The piquero de Humboldt inhabits coastal zones from Arica to Chiloé (Los Lagos Region), living mainly on bluffs, large boulders and cliffs. It relies upon the cold Humboldt current, preying upon species associated with it. It hunts by diving steeply into the sea from high up in the air, hitting the water at great speed and plunging down several meters, using its wings to swim until coming back up to the surface.

This mighty bird, which is featured on Chile’s national crest, is distributed throughout the South American Andes. In Chile, the condor is found in the Andes along the length of the country, from the northern coasts to the far south. It is one of the world’s largest flying birds: it can measure up to 1.2 meters in length and weigh up to 15 kilograms, with a wingspan that can reach 3.2 meters. It has a black body with metallic hues and a necklace of white feathers; the males sport a dark reddish crest. Condors can fly up to 200 km in a day in search of their food, which consists of carrion and dying animals. Its dense plumage allows it to live in very cold climates.

Endemic to South America, this bird is found in southern Chile and central and southern Argentina. In Chile, the ñandu inhabits the Patagonian steppe of the Aysén and Magallanes regions. The Ñandu is the largest bird in Chile, measuring up to 1.8 meters in height, with females weighing up to 25 kg and males up to 35. It is flightless, but can run at high speeds, up to 60 km/hour It is also a good swimmer when it has to cross watercourses. The Ñandu has a gray body and a long neck. It feeds off plants, fruit, insects and even small mammals, and has a lifespan of up to 15 years.

The black-browed albatross is distributed over much of the Southern hemisphere’s seas. It is found off the entire coast of Chile, from north to south. It has a white body, black wings, and a yellow bill. It measures up to 80 cm in length and has a wingspan of 225 cm. It feeds mainly on fish and shellfish, along with carrion and fish waste dumped by fishing boats.

In Chile, the Loica is distributed between the Atacama and Magallanes regions, usually living on the ground in low-lying, humid areas and in the mountains up to 2,500 m altitude. It has a deep red breast, and the rest of its body is dark brown. It can reach up to 28 cm in length and eats insects, fruit and seeds.

This species is endemic to Chile, with most birds found between the Atacama Region and the southern Maule Region, mainly on rocky slopes. It measures around 25 centimeters in length. It nests in caves on hillsides or ravine walls and is very difficult to detect. When searching for food, it can lift quite heavy rocks with its large feet.

The Juan Fernández firecrown is a hummingbird species endemic to the Juan Fernández Archipelago and found only in the dense forests of Robinson Crusoe Island. Today, no more than a thousand of these birds remain in the wild, according to conservation organization Oikonos. It measures 13 centimeters long and eats plants and small insects. Using moss and plant material, the female makes her nest in forest clearings, exclusively on the endemic Luma tree of the archipelago. It is currently classified as critically endangered because of the loss and degradation of its habitat due to human activities and invasive plants.

Also known as the burrowing parrot, the tricahue is a brightly-colored, vociferous species found primarily in the Andean foothills of Chile’s O’Higgins and Maule regions and, much less commonly, in some parts of the Atacama and Coquimbo regions. It inhabits semiarid foothill environments, living near rivers or river canyons. It measures up to 47 centimeters in length and has a multicolored body that includes an orange breast and a head and back of dark green with yellow, blue and greyish hues. It feeds on seeds, fruit and flowers.

This bird is distributed in southern Chile and Argentina. In our country, it is found in temperate forests, from O’Higgins to the Aysén Region. It can reach up to 20 cm in length and has a reddish breast. It feeds of insects and other invertebrates, which it hunts by scratching the ground with its feet like a chicken.

Its name derives from the Mapudungún word “chukaw,” which means “mountain bird.” According to Mapuche beliefs, it is the primary bird of portents, as it foretells whether travelers will have a good or bad journey, depending on whether they hear it sing on their right- or left-hand side, respectively.

The torrent duck or pato cortacorrientes is an aquatic species that lives exclusively in the rushing waters of the Andes, from Colombia to Tierra del Fuego. It measures up to 43 centimeters long and has a white and black body, with a reddish bill and feet. Its diet consists of plants, small fish, worms and shellfish it finds in the water. It has a slender body and does not like to fly, but is a very powerful swimmer, spending most of its time in fast-flowing rivers, where you can find it swimming against the current or resting upon a rock.

Also known as the northern penguin, pájaro niño (baby-bird) and pato burro (duck-donkey), this penguin lives on the coasts and seas of Peru and Chile where the Humboldt Current flows. In our country, it is found from the far north to Chiloé Island (Los Lagos Region). It is white and black, measuring around 70 cm high and weighing up to 5 kg. Its diet consists mainly of fish such as anchoveta, pejerrey (silverside) and small sardines.

The main threats it faces are death from fishing nets and illegal capture. The Humboldt Penguin National Reserve, off the coast of the Atacama and Coquimbo regions, boasts the largest breeding colonies of this species.