TIME magazine has just included it among the 50 World’s Greatest Places of 2022, and Conde Nast magazine, among the 22 Best Places to Go in 2022. Located 3,700 kilometers (2,300 miles) from Santiago, in the middle of the Pacific Ocean, Rapa Nui is one of the most remote places in the world, and is home to some of the greatest archaeological treasures in all of Polynesia. The moai, gigantic stone statues located throughout the island, were probably built between 1200 and 1500 A.D., and are a World Heritage Site. After being closed to tourism for more than two years due to the pandemic, the remote island has now reopened for the world to rediscover and delight in its mysteries and wonders. Iorana!

Check the requirements to visit the island here.

Hanga Rau (Anakena): This beach is located 18 kilometers (11 miles) from the urban center of Hanga Roa, and can be reached via the road that crosses the island. It was here that the first human settlement in Rapa Nui was located, and where the first Ariki (chief) of the island, Hotu Matu’a, landed and, therefore, is considered the cradle of Rapa Nui’s history. The Ahu Nau is located on this white sand beach, populated by coconut palms brought from Tahiti. This platform of 7 moais was restored between 1978 and 1980, and it had been very well conserved thanks to having been covered by a sand dune. During the restoration of this ahu (platform), it was discovered that the moai had coral eyes, and the largest complete eye found to date was identified, exhibited at present in the Rapa Nui Anthropological Museum. 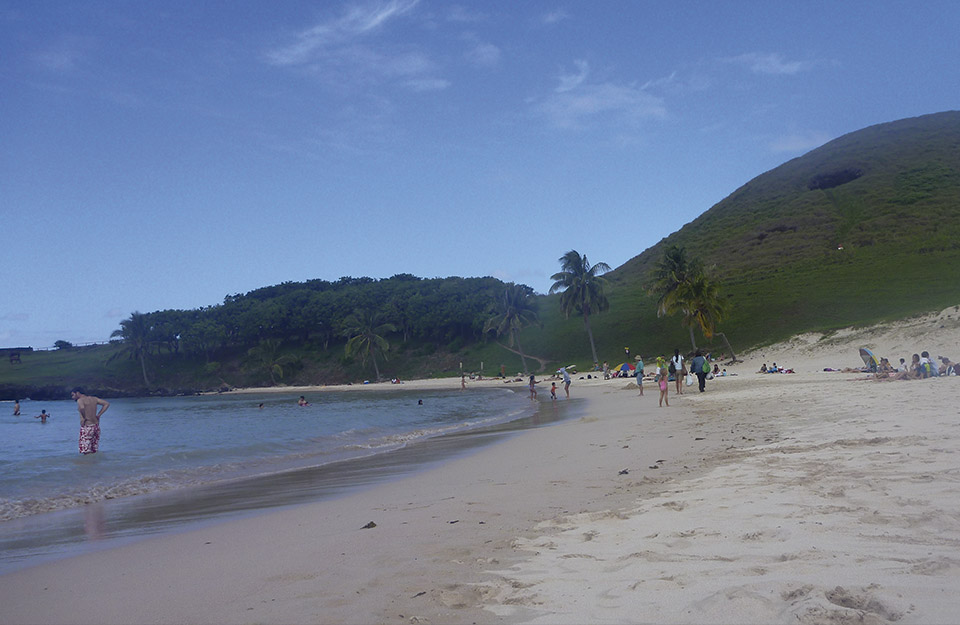 Ahu Tongariki: not only is it Rapa Nui´s most iconic postcard, but it is also the largest ceremonial center in all of Polynesia. Located approximately 20 kilometers (12.4 miles) from Hanga Roa, the ideal time to visit this site is at sunrise, giving visitors one of the most breathtaking experiences. It has also recently been chosen as one of the ten most beautiful sunrises in the world. The 15 moai of the Ahu Tongariki were demolished in the 17th century, and subsequently suffered the adverse effects of climate, as well as the mega-earthquake and tsunami that hit the island on May 1960 and destroyed anything left standing. Its restoration began in October 1992 and was completed in 1996 thanks to the cooperation of Chilean and foreign archaeologists as well as the Rapa Nui people. Archaeologists from Universidad de Chile, Claudio Cristino -who was also director of the Anthropological Museum of Rapa Nui-, and Patricia Vargas were in charge of its restoration. 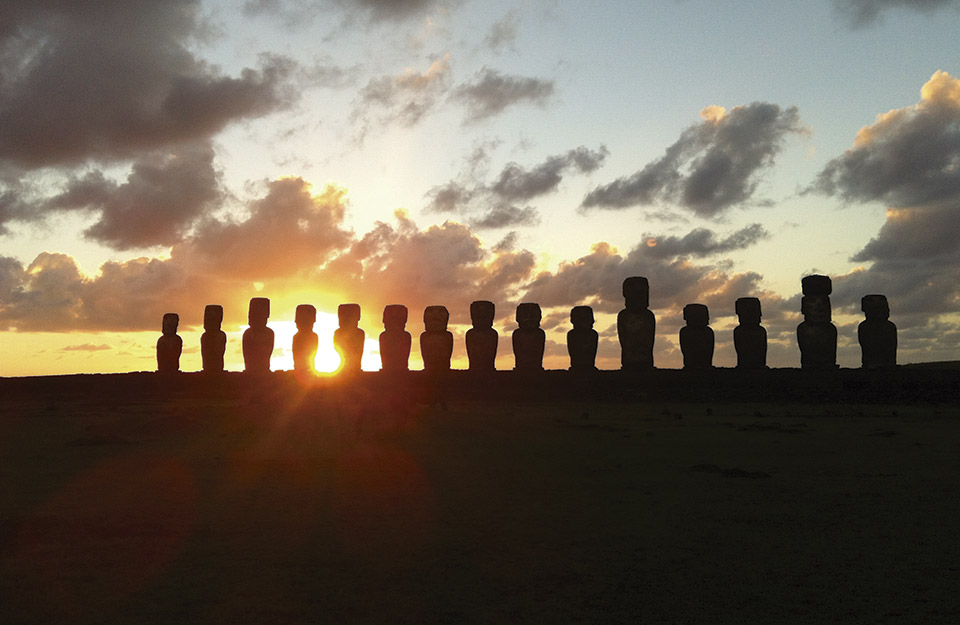 Rano Raraku: very close to Tongariki (one kilometer away) is the Rano Raraku volcano, which contains a lagoon in its crater. This volcano is key in Rapa Nui’s history, since the quarry where the moai were made is located on its slopes and then moved to the rest of the island using methods that are still debated and continue to generate controversy. There are still 397 statues at various stages of completion, which has allowed the researchers who restored them to understand how they were formed. In this quarry the largest moai found on the island, Te Tokanga, is located. It has an approximate height of 21 meters (69 feet) and an estimated weight of 250 tons, according to studies carried out by archaeologist Claudio Cristino. 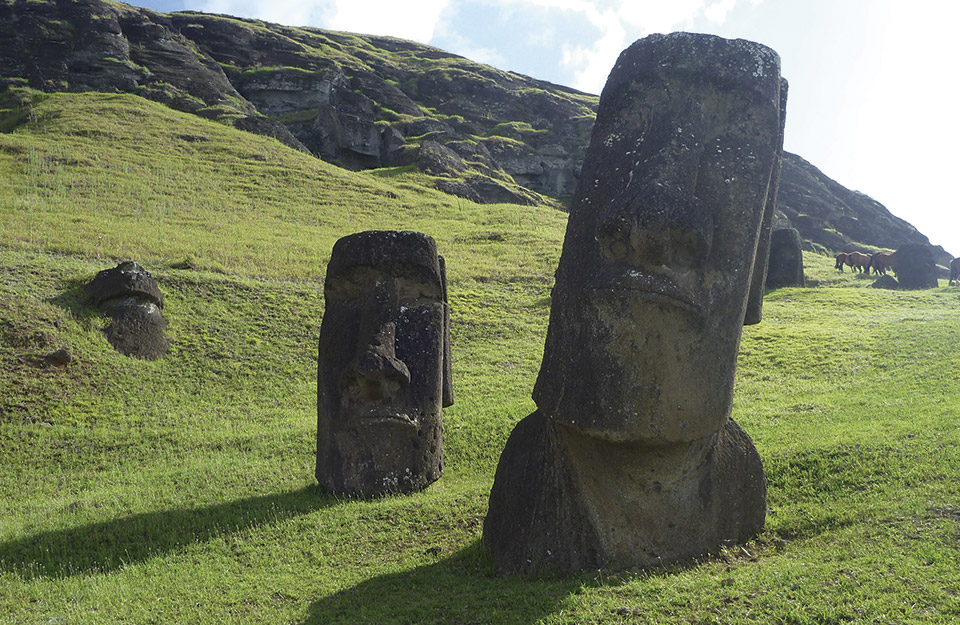 Ahu Akivi: Located 9 kilometers (5.6 miles) north of Hanga Roa, this platform of seven moai was Rapa Nui’s first restored ceremonial site, marking a turning point on the island, since it was the first time in 150 years that the islanders could once more contemplate an ahu with all its moai standing. This work was carried out in 1960 by a team led by the American William Mulloy, one of the archaeologists who traveled to the island with Thor Heyerdahl’s expedition in 1955. This is one of the few platforms erected in the interior of the island (most are near the sea), but it is key. It consists of the only moai facing the sea in the whole island, although in reality they are oriented towards an esplanade where there used to be a village, protecting its inhabitants. In addition, it is said to have astronomical significance due to the alignment of the platform from north to south. 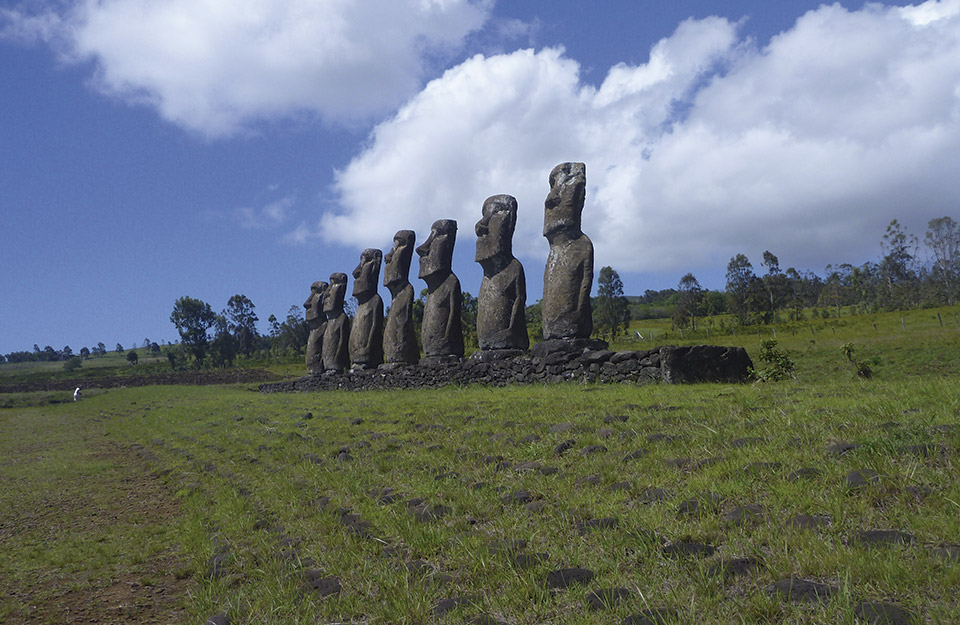 Maunga Terevaka: this is the youngest and largest volcano, and is the highest spot on the island, with a height of 511 meters (1676 feet) above sea level. It can be climbed either on foot or on horseback in a couple of hours starting from Ahu Akivi, with few trees along the way. From its summit there is a 360° view of the Pacific Ocean that, observed under the unique light of sunrise or sunset, allows one to contemplate the curvature of the Earth. It doesn’t only consist of one crater, as it originates from numerous eruptions coming from a system of small parasitic cones. 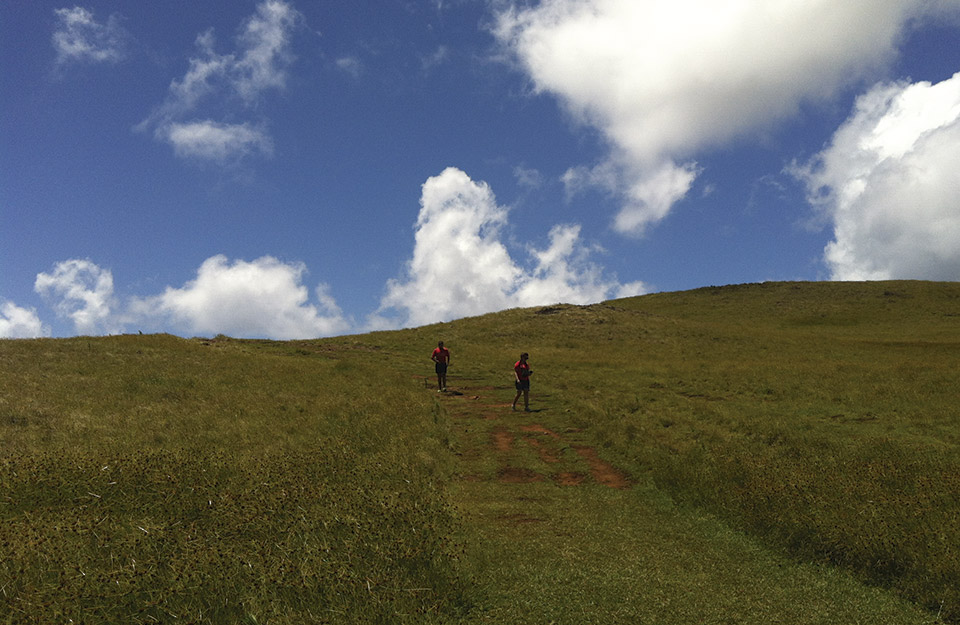 Caves and caverns: the volcanic lava flows that gave rise to the island also created a complex system of lava tubes that run through much of its subsoil. One of the must-see places is Ana Te Pahu, located on the slopes of the Terevaka volcano, in the Roiho area. It is also known as the banana tree cave, due to the large number of these trees found at its entrance, and was used by the ancient inhabitants as a refuge. Another of the best-known caves is Ana Kakenga, or the two windows cave, created by the outflow of lava flow into the sea, at about 30 meters (98 feet) high. This cave is difficult to access because its entrance is very narrow and at ground level. 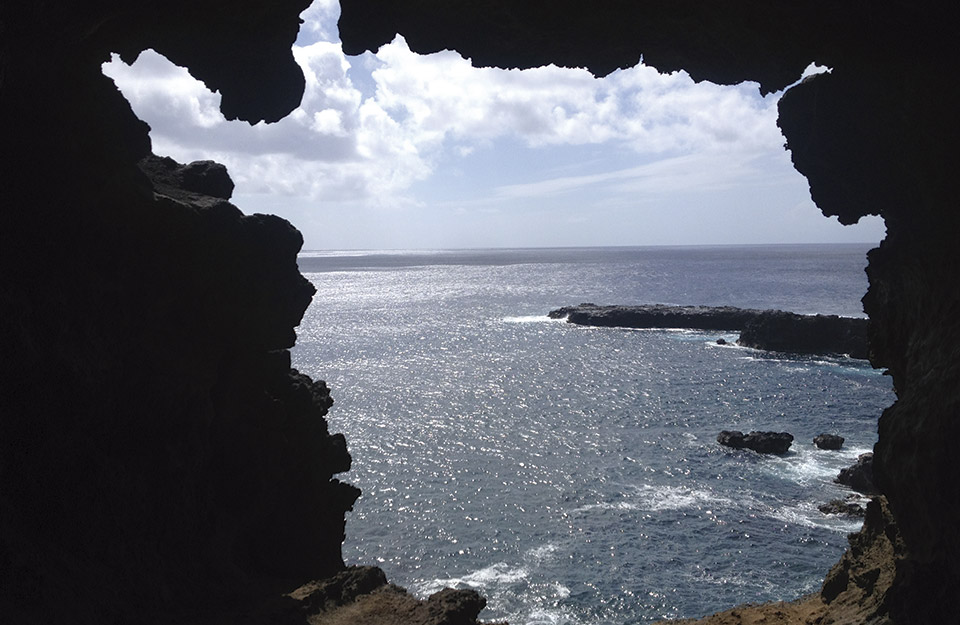 Puna Pau: this secondary volcano located approximately 7 kilometers (4.3 miles) from Hanga Roa also has historical relevance for the Rapa Nui culture. Whilst the moai were carved in Rano Raraku; the pukaos, or red headdresses that were installed on the head of these statues, were made in Puna Pau. The interior of the crater is a natural source of red scoria, a soft volcanic stone that was used to make these headdresses, as well as a variety of other artifacts that allowed for the development of the Rapa Nui culture, such as vessels, cooking materials and handicrafts. 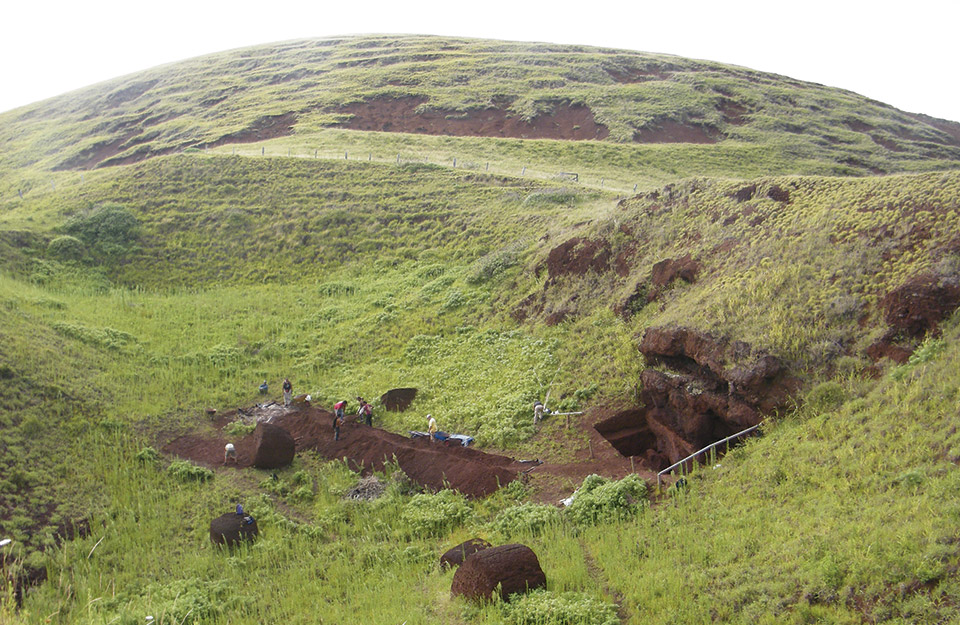 Rano Kau: although it is currently closed to visitors, Rano Kau is one of the most important places on the island. Located 6 kilometers (3.7 miles) from Hanga Roa, at more than 300 meters (984 feet) above sea level, it has the largest crater on the island (1.6 kilometers or 1 mile in diameter) with a freshwater lagoon inside. Its origin dates back to an eruptive process that occurred about 2.5 million years ago. Caves, petroglyphs and house foundations have been found inside and outside the crater, traces that show that the volcano was of great importance in the lives of the ancient inhabitants. 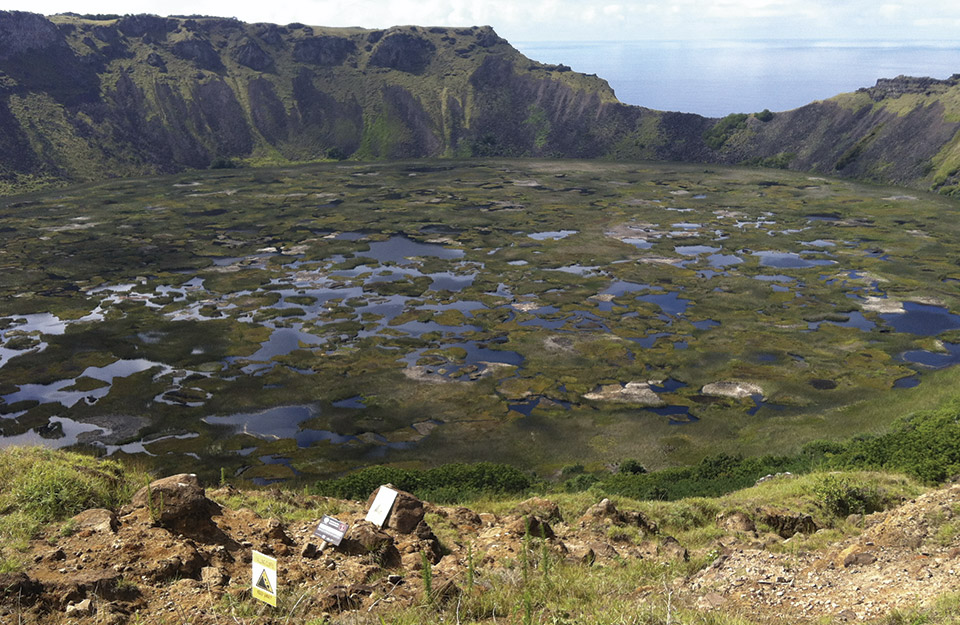 Orongo ceremonial village: located on the narrowest edge of the Rano Kau is this ceremonial village, composed of 53 houses, related to the Manutara cult (the sacred bird of Rapa Nui) which competed with Tangata Manu (birdman). Its use was seasonal – just a few weeks a year, at the beginning of spring. There, rooms were built using flagstone, although their design is reminiscent of the hare paenga (boat houses), common in the rest of the island. Orongo is also the main rock art site of Rapa Nui, with hundreds of bird-man petroglyphs, revealing how important it was. It is believed that the village began to be occupied in the 15th century, although the Tangata Manu ceremony became more important in the following centuries. 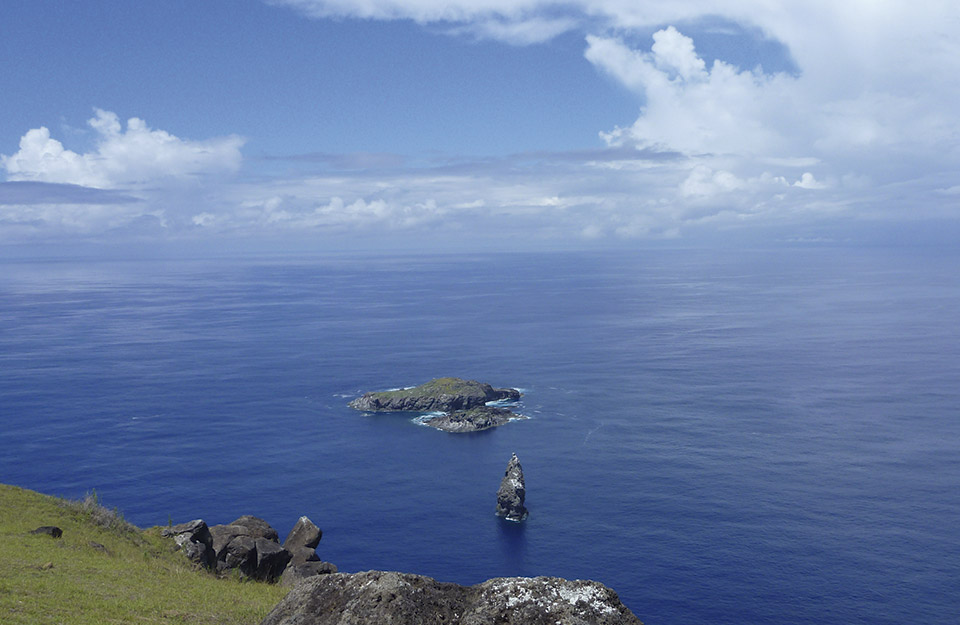 Tahai Complex: located north of Hanga Roa, this archaeological complex is not only one of the oldest settlements on the island, but also boasts one of the most impressive sceneries. It is here that you can enjoy the best sunset in Rapa Nui. This archaeological site has three ceremonial platforms. The first from left to right is Ahu Vai Uri, on which five moai are erected; then there is the oldest of the 3 platforms, Ahu Tahai, with a solitary moai of about 4.5 meters (14.7 feet) high; and finally, Ahu Ko Te Riku, on which stands a single moai (5 meters or 16 feet high), which was restored with all the adornments belonging to finished statues, that is, a pukao (headdress), and replicas of coral eyes, making it the only moai with eyes that exists at present on the island. This complex was restored between 1968 and 1970. In front of it lie the remains of William Mulloy, who was the precursor of the island’s restoration. 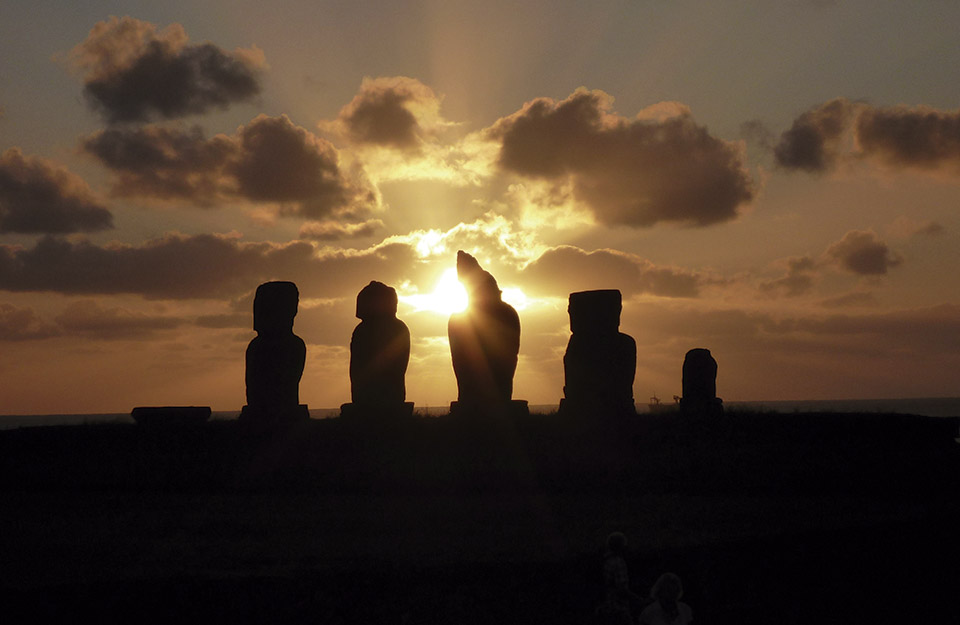 North coast: can only be visited on foot, on a 15-kilometer (9-mile or approximately 6-hour) tour that goes from Ahu Akivi along the entire west coast of the island towards the north, ending at Anakena beach. Due to its difficult access and lack of roads, it is the best-preserved coast in the area with the highest concentration of archaeological sites on the island, with rock art, platforms, among other attractions that can only be found with a local guide.

Poike: this little-known volcano contains a large quantity of archeology and petroglyphs, as well as remarkable sites such as the so-called Cave of the Virgins, and spectacular cliffs. There is no road, and so this tour can only be done on foot, on a 5-hour hike.