Hundreds of researchers from around the world are opening the doors to science and exploration in different parts of Chile and discovering new destinations for tourists to become true explorers.

Thanks to its geographic diversity and the international scientific community’s growing interest in its unique attributes, Chile has positioned itself as a natural laboratory for the world. This has allowed for the development of astronomy, archeology, paleontology, geology, volcanology, the study of climate change, anti-seismic engineering, and many other fields.

Although Chile continues to position itself as an adventure tourism destination, it is increasingly offering the opportunity to experience remote areas and nature, with content and knowledge that generates value for true explorers who come to the intersection of science and tourism to learn about phenomena that they won’t find anywhere else in the world.

Here are 10 Chilean scientific tourism destinations that offer surprises from the north of the country to its southernmost tip:

Located south of San Pedro de Atacama in Los Flamencos National Reserve, Tulor Village is one of the most important archeological sites in northern Chile. Dating back 2,800 years, it is comprised of 26 circular adobe homes connected by labyrinthine passages that delight visitors. Chilean archaeologist Ana María Barón unearthed 10% of the village in 1982. Tulor Village may have been an important location for the exchange of goods via llama caravans, which allowed a broad territory to be integrated among the peoples who inhabited the desert.

San Pedro de Atacama will soon be home to the new Gustavo Le Paige Museum, which is being built to house the remains found at the site. 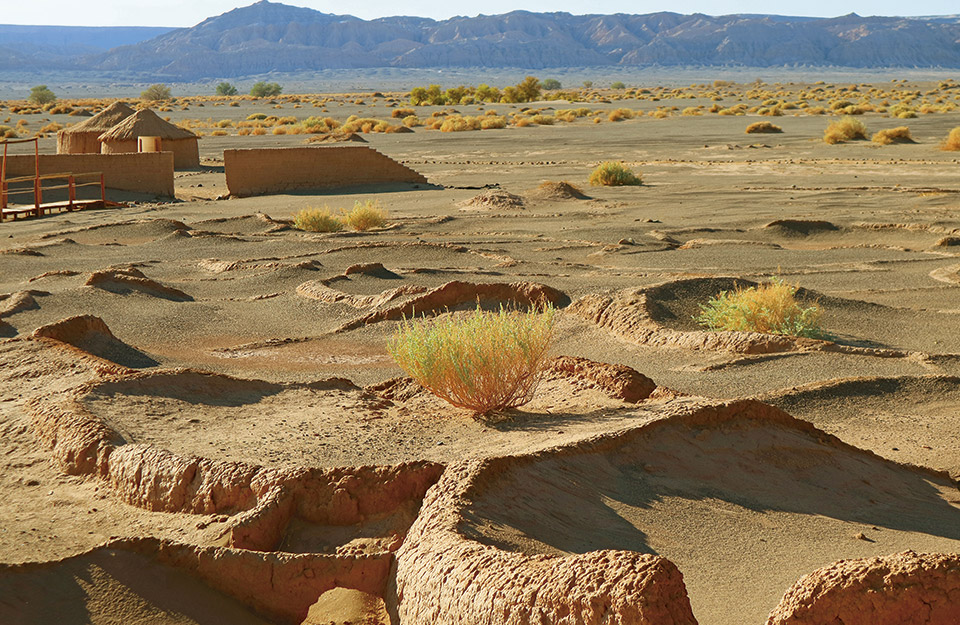 Located near the Bahía Inglesa beach resort in the Atacama Region, Los Dedos Paleontological Park is an open-air museum comprised of 370 hectares with a path that tourists can follow to observe fossils from over 70 species. These pieces reveal that the area was covered by the ocean during the Miocene Period, over 5 million years ago. The site was studied by British explorer Charles Darwin in the late 19th century. The marine species include the Megalodon, a giant extinct shark that inhabited the coasts 20 million years ago. The area was also home to the Pelagornis Chilensis, the largest prehistoric bird in the world, which dates back around 10 million years. Caldera’s Paleontology Museum houses the Cerro Ballena site, the region’s most important paleontological discovery: 40 baleen whales found in 2010 that date back up to 9 million years.

The world’s clearest skies have made northern Chile a magnet for astrotourism. The Elqui Valley’s Cerro Tololo Inter-American Observatory is one of many such facilities found in northern Chile. Perched 2,200 meters above sea level, it was opened in 1967 and is operated by the Association of Universities for Research in Astronomy (AURA). One way to learn about astronomers’ field work is to visit this observatory, which has eight telescopes and a radio telescope. Tololo offers visitors the opportunity to have a real experience with space. Be sure to make your reservation at least one month in advance.

Considered a “super volcano” due to the fact that it includes 22 stratovolcanoes, lava domes, cones, fissures and craters, Laguna del Maule is a cauldron-shaped volcanic complex that measures 25 by 15 kilometers. It is partially filled by dazzling calm blue waters, but magma lies 5 kilometers below the surface. Over the past few years, there have been 36 eruptions at the site, and it presents one of the fastest ground elevations in history, up to 25 centimeters per year. Its volcanic composition has generated international interest, including that of the United States Geological Survey. There are currently 11 seismic stations installed at the complex to monitor its activity.

Visitors can explore a 10-kilometer-long circuit that is marked and designed for hiking. 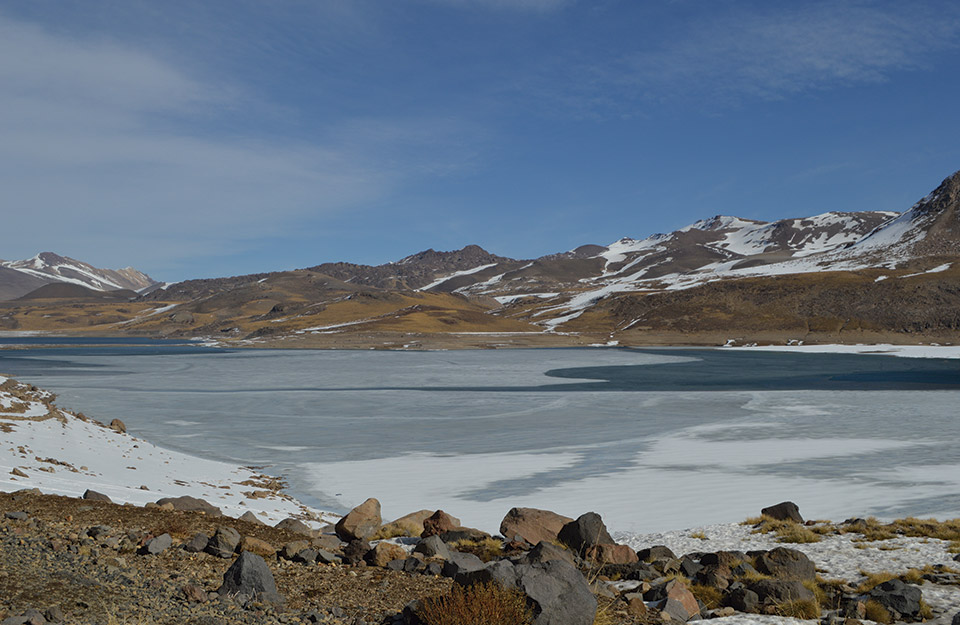 The Senda Darwin Biological Station is a private nature reserve meant for scientific research, environmental education and the conservation of Chile’s native forests. It is owned by Fundación Senda Darwin, which was created by a group of Chilean and foreign researchers from several universities in 1994.

The site is named after British naturalist Charles Darwin, who visited Chiloé during his travels in Chile in 1834 and 1835 to study its flora and fauna. It is located 27 kilometers from the city of Ancud and has three educational paths that are open to visitors: the Pichihuillilemu Discovery Path, the Charles Darwin Path and the Tepual Path. Visitors can also learn about the foundation’s flagship projects, including the study of Darwin’s fox, an endangered species that is endemic to Chile. Each year the entity hosts international volunteers who are interested in studying biodiversity and working in the field of environmental education.

Kütralkura Geopark is located in the Araucanía Region and is home to 35 geosites connected to Chile’s volcanoes. It is the first such site in Chile to have the support of UNESCO. It includes Conguillío National Park; the Llaima, Lonquimay, Sierra Nevada, Nevados de Sollipulli and Tolhuaca Volcanoes; and several national reserves. Kütralkura’s geology represents a volcanic Chile associated with the “subduction” phenomenon, where the Nazca and Antarctica oceanic plates move and sink below the South American continental plate, releasing a large amount of energy. This causes deformations in the land cortex and creates faults, volcanoes and earthquakes. The project was developed by a team of geographers, biologists, anthropologists and tourism experts under the leadership of geologists Manuel Schilling and Álvaro Amigo. They collaborated with local Mapuche-Pewenche communities to develop geotourism, science education and geological heritage conservation.

The Marble Chapel Natural Sanctuary is a group of islets located on the banks of the bright blue Lake General Carrera. They were named the Marble Cathedral, Marble Chapel and Marble Cavern because of their geoforms. Over the course of thousands of years, the wind and water revealed marble strata, creating cavities and caves with mineral colors that dazzle the tourists and geologists who explore and study the area from their kayaks. The caverns are made of marble that formed approximately 300 million years ago.

The site is internationally known as an important geological heritage area. 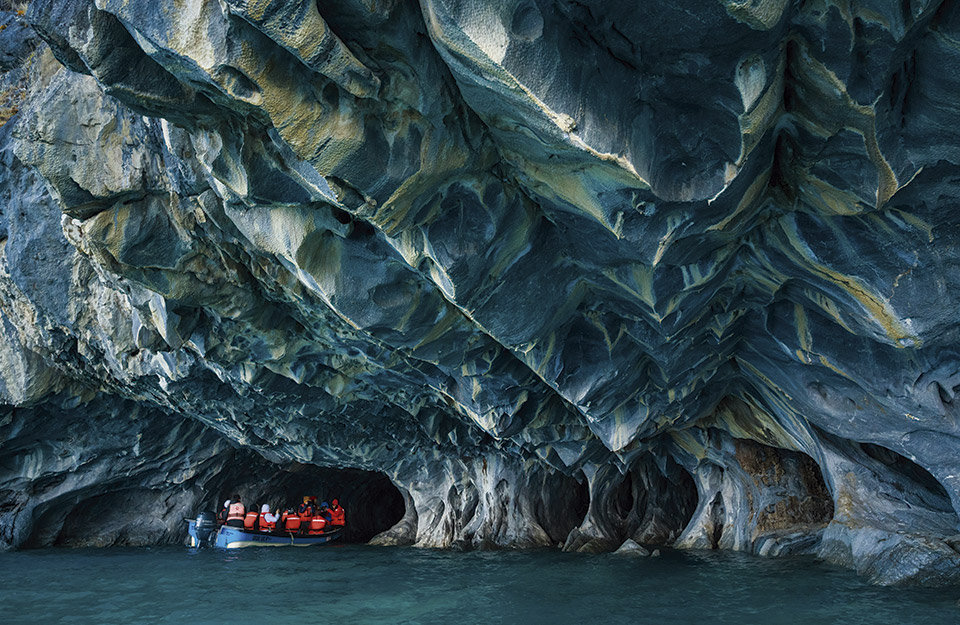 Located in the Aysén Region, this site spans 1.7 million hectares, 400,000 of which are comprised of the centuries old Northern Ice Fields. The park is also home to San Valentín Mountain, which rises 4,058 meters above sea level, and the San Rafael lagoon and glacier. Visitors can tour the ice formations in small boats and observe enormous blocks break away from the glacier and fall into the lagoon. The San Rafael glacier has lost over 100 square kilometers of surface area over the past 150 years. This has inspired scientists to study it to understand the impact of climate change.

Omora Ethnobotanical Park is located in the Cape Horn Biosphere Reserve on Navarino Island, very close to Puerto Williams, the southernmost city in the world. It can be accessed by plane from Punta Arenas, and offers incredible views of Tierra del Fuego and the majestic Darwin Mountains. You can also choose the 37-hour boat trip, which departs from the same city and takes you through some of the country’s most remote channels, which are full of glaciers. Omora Ethnobotanical Park combines research, science, education, art and philosophy. Led by Ricardo Rozzi and Francisca Massardo, who have focused on its “miniature forests,” the park has circuits for observing tiny moss, lichens and hepatica plants that have inspired the phrase “magnifying glass tourism.”

Located in the heart of Antarctica, the Union Glacier Joint Scientific Polar Station is located 1,000 kilometers from the South Pole and a six-hour flight from Punta Arenas. The site is home to a station that is comprised of 10 glaciers. It offers a clear opportunity for microbiology, glaciology and meteorology studies. Chilean and foreign scientists work there on various topics of global interest, and create special expeditions with unique scientific missions. Visitors can access the location on flights offered by the US company Antarctic Logistic Expedition, which organizes trips that offer a unique experience in an astounding landscape that provides knowledge that is important to everyone.

15 surprising birds to watch for when traveling in Chile